Understand projectors better with our Projector Specifications Comparison Table below.

If you are looking for more information about renting a projector, refer to our Projector Rental Guide or  Cables and Adpters Guide pages. This will help guide you to the best fit for your needs!

If you are ready to rent a projector or screen just visit our Projector Rental Page or Screen Rental Page.

Other topics we explain in this Projector Specification Guide: 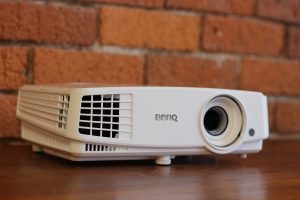 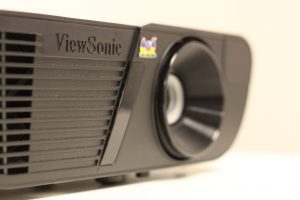 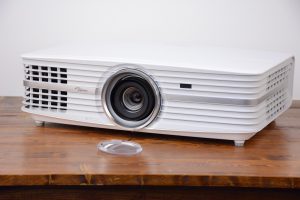 Projectors come in a wide range of brightness levels which are measured in lumens. The brighter the projector is, the more lumens it will have.

Two separate brightness measurements can help you choose a projector that will display bright, colorful images:

-Color brightness (color light output) measures how bright the projected colors of red, blue and yellow will be; the higher the number, the more detail and vibrancy you will see.

The amount of brightness you need is determined by the room you project in. For home theater projectors where ambient light is kept to a minimum, you’ll need a minimum of 1500 lumens. In comparison, classrooms, conference rooms, or rooms with windows, a projector with a minimum of 2500 lumens is best. Lastly, for large venues or an outdoor setting, you’ll need more lumens. In this case we recommend a minimum of 5000 lumens.

In a darkened room, a contrast ratio of at least 1500:1 is recommended, while 2000:1 or higher is considered excellent.

Resolution is the number of pixels used to display an image. Higher resolutions mean that more pixels are used to create the image, resulting in a crisper, more clear image. High resolution is important for projecting detailed charts and graphs, and high-definition video. The resolution is indicated by a number combination such as 1920 x 1200 for Full HD (1080p) projectors. This indicates that there are 1920 pixels horizontally across the display by 1200 lines of pixels vertically. In total, this equals 2,304,000 pixels in total that make up the image seen on the screen.

XGA (1024×768 pixels, 4:3 aspect ratio): XGA is widely used. Most computers use XGA as their native resolution, so pairing computers to XGA projectors is common.

WXGA (1280×800 pixels, 16:10 aspect ratio): WXGA is the widescreen version of XGA — delivering the same vertical resolution but providing 20% more horizontal resolution. This has become a common resolution for notebook computers and smartphone.

WUXGA (1920×1200 pixels, 16:10 aspect ratio): WUXGA is becoming the standard for higher-end notebooks and workstation computers. In addition, WUXGA is used for installation projectors and large-venues that require bright, high-definition content.

720p (1280×720 pixels, 16:9 aspect ratio): This format is most commonly used for simple movie projection. It matches the 720p HDTV standard. All Business Projectors has 720p as the native resolution, if you want to display high-quality image but do not have a huge budget, this is the best choice!

1080p (1920×1080 pixels, 16:9 aspect ratio): Full HD Projector is now the standard format for home theater. It matches the 1080i/1080p HDTV broadcast and Blu-ray formats. For purposes such as showcasing your film, tracing a mural on the wall, this is hands down the best option!